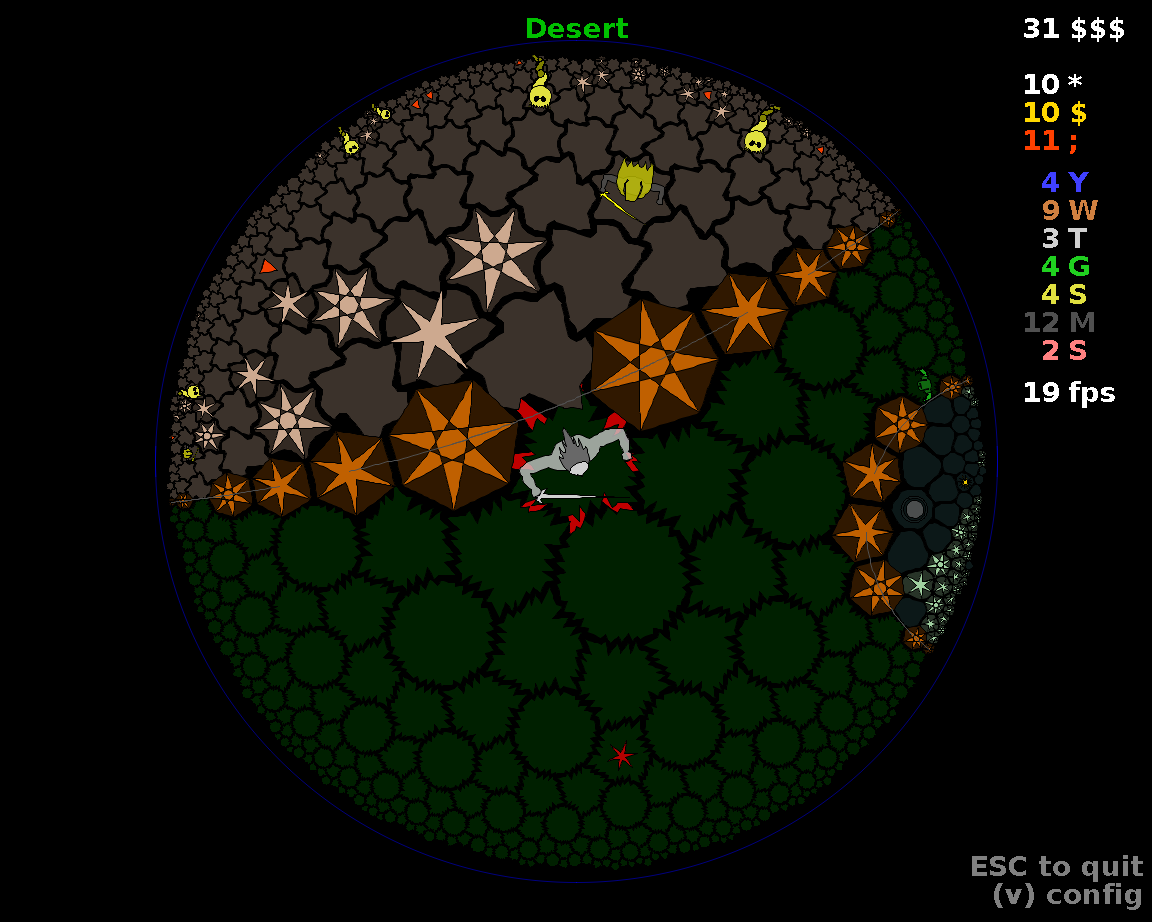 You are a lone outsider in a strange, non-Euclidean world. You can move with the numpad, vi keys (hjklyubn), or mouse. You can also skip turns by pressing “.”. As a rogue, your goal is to collect as many treasures as possible. However, collecting treasures attracts dangerous monsters (on the other hand, killing the monsters allows more treasures to be generated). You can kill most monsters by moving into them. Similarly, if the monster was next to you at the end of your turn, it would kill you. The game protects you from getting yourself killed accidentally by ignoring moves which lead to instant death (similar to the check rule from Chess). Ultimately, you will probably run into a situation where monsters surround you. That means that your adventure is over, and you will have to teleport back to the Euclidean world to survive by pressing [Esc] (in other words: quit). Collecting enough treasure also allows you to find rare magical orbs, which grant you one-time or time-limited special abilities. The world is a combination of eleven types of lands. Each land type has specific style (monsters, treasure, magical orbs, terrain features). Collecting treasures only attracts more monsters in lands of the same type, so you can try to collect lots of treasure in several different lands! Some of these lands are available from the beginning, others can be found only if you have proven yourself (press [Esc] to know what you should do to access more lands). Ultimately, you will be able to access Hell, and look for the fabulous Orbs of Yendor which are hidden there. Get at least one of them to prove that you are a true winner! Only the best players will be able to face the challenges of Hell, but both the monsters and the challenges associated with the Orbs of Yendor are different than in the rest of the game, so it should be worth it. You can see tooltips by placing the mouse over stuff. You can also right click to get more information about game objects. [desktop only] Press [v] to configure the game. You can also rotate the world by pressing arrow keys, [Page Up] and [Page Down] (not numpad). You can center on the PC by pressing [Home]. Your scores and other stats about your games are recorded to file hyperrogue.log (in Linux, ~/.hyperrogue.log). You can save your configation to file hyperrogue.ini (in Linux, ~/.hyperrogue.ini).